Networking for freelancers: Our 8 best tips 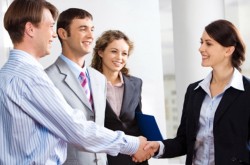 While you might be the most talented freelancer in the world, if you just sit at home waiting for jobs to fall into your lap, instead of letting potential clients know of your existence and how skilled or experienced you are at work, you will most likely struggle to land jobs.

The really successful freelancers aren´t necessarily the ones with the most talent - they are the people who tell the world what they can do and get new customers. Ultimately, being a freelancer is, to a large extent, a ´people´s business´ - you get the best jobs through contacts from your own network. So if you want to advance your career as a freelancer, you should learn to network. Our 8 tips are definitely a good start:

Tip 1: Choose the right event
Especially at the beginning of your freelance career, many people make the following mistakes: You attend almost every virtual or physical event in the hope of acquiring customers for your own projects. The chance of finding exactly the customers who really suit you at events is not the same everywhere. Especially not if you mainly go where there are only colleagues who, like you, are on the hunt for customers. In order to get serious customers, it is better to choose an event where you meet people who are already where you want to be and also companies that have the money to hire you.

Tip 2: Don´t necessarily think of it as “networking”
If you impose on yourself before attending an event the idea that you absolutely have to network now, that can create a lot of pressure and make your appearance and connection with people appear to be forced. Instead, tell yourself that you are going to an event to get out of the house and socialize, or to get support from other freelancers. Ultimately, nobody wants to give someone an assignment who is practically begging for it.

Tip 3: Have a clear goal when networking
It might sound strange to set goals for networking, but this approach can be really helpful. Only when you know the direction that you are heading can you meet people who will help you along the way. These goals can be, for example, the search for a support network, a mentor or for further assignments. Remember to communicate your goals clearly too.

Tip 4: Stay in touch
To get the most out of networking, stay connected after exchanging contacts. It is best not to wait too long for this, but rather send a short message the next day in which you tie in with the conversation and, if necessary, arrange a first meeting (it can be a virtual meeting). These so-called follow-ups are often more effective than one would think - you will be remembered as a professional networker and thus show your counterpart that you mean business.

Tip 5: Work in a co-working space
In co-working spaces, one can meet many interesting people from different industries. By sharing an office with other freelancers, your network often grows by itself.

Tip 7: Be prepared for opportunities
You may be familiar with the saying, "Happiness comes when preparation meets opportunity" - should you be given an opportunity to spend some time with someone who could make a positive difference to your career, it should not be missed. Always be clear about your goals and prepare a brief summary of what you are doing and why you are so good at it. Then, if you get the chance to impress someone, you can do that too.

Tip 8: Give speeches and conduct workshops
Prove your authority and professional competence by giving lectures and workshops on topics that you can master as if you were asleep. This is the best way to gradually build up a positive reputation as an expert in your field and thereby increase your chances of attracting new customers. When you are starting out in this aspect, it can be worthwhile to speak or conduct workshops for free to build up your reputation and network.

This article was published in the Australia Freelance Market News 82.